I have been officially blogging now for count them . . . one entire month! LOL! I never imagined doing something like this. I've seen blogs before and always thought about doing it. I always worried I'd become one of those blogs that started and never took off. I remember seeing blogs that had great titles and I thought, oooo, I want to read/look at that and I'd click on their pages and there would be a post that was older than time or a blank page. Which reminds me; why do men think it's cool to take a picture of themselves drinking a beer? OK, maybe for a college aged kid, this is something that can be viewed as somewhat normal. But I'm talking grown men who look to be well into their 40s or more! Please! Yeah, how does that saying go . . . I think, therefore, I am single? Yes, that's me, thank you! :) And then, why would you want to even start a blog and the first thing you write is something telling folks to F*** OFF? What is the point to all that? I just don't get people sometimes! Anyway, sorry, let me get off my soap box here. So . . . when I started this blog, I had a blank page for a bit. I remember thinking though that if I couldn't get it started, I'd ask to have it deleted. I wouldn't want others being deceived by a picture or title leading them to believe that there was more to see. And I most certainly wasn't gonna download that awesome picture of myself with the two-beer drinking hat! I know, I know, you probably want to see it, but I like to think of myself as a somewhat respectable adult here, so please, email me, I'll send it to you! ;) LOL It's been a struggle some days, but I think only because I started all of this with the hopes of sharing my paper crafts and maybe inspiring others with it, but I find myself limited with the scrapping things I have with me and not able to be as creative as I had hoped to be. I have found myself writing and sharing funny (or scary) things I've seen instead. I did want to wish myself a "Happy Anniversary" and post with a written piece over my growth as a person in the blogging community this past month and hope you'd be interested enough to read all about it! :)

Well, for starters, I haven't read any books or magazines that I feel, I must share nor has there been too much TV or movies to review, with the exception of the movie, Rosewood. It is an old movie, but it was the most disturbing movie I had seen in a really long time and I cried during a good portion of the movie. If disturbing is what you want to see, check it out! Oh, and I've also become horribly addicted to the show, Clean House. I know there's lots of these cleaning house shows these days, but I really like this one. And also, Law & Order: Criminal Intent launched it's new season on USA. Gotta love Vincent D"Onofrio! So other than that, not much on TV! LOL! Oh, but there's also . . . just kidding!

I turned 46 on the 18th of September and I shared pics of the celebration in Lubbock with my family. I don't feel 46. My body does, but I still think I'm a spring chicken in a barnyard filled with old hens! LOL! Every morning when I jump out of bed, I check for new aches and concerns. Any day that I don't encounter one, I'm thinking is starting out as a good day! LOL Anyway, my family gave me cash as birthday gifts and I've spent a portion of it on (GASP!) scrapping supplies. *blush* I still have a good portion left and am waiting to spend that on . . . more scrapping supplies! I did also buy a blue top that I look radiantly pretty in ;) and a much needed toaster. NOT a red one, but only cause I couldn't find one. I know, I know, I probably should have waited and it should have been red, but let me tell you it, keeping fingers crossed, has caused me no grief or frustrations. Not once has it burned my toast! I think that's good! LOL!

I've not done much this past month. Albuquerque has a Balloon Fest in October and here are a few pics for you to see. I wanted to take a picture of them as they took off because the sky just fills up with all these hot air balloons and it looks wicked awesome! My digital camera's batteries died and by the time I replaced them, the balloons had dispersed. You really need to see them when they first take off. It is a sight to behold that is for sure! 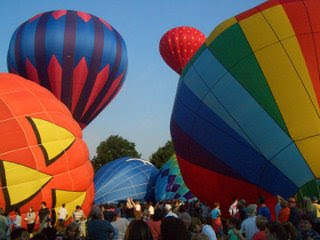 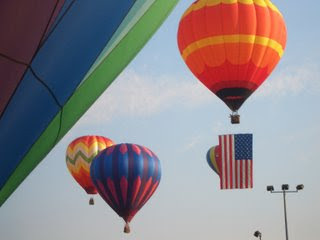 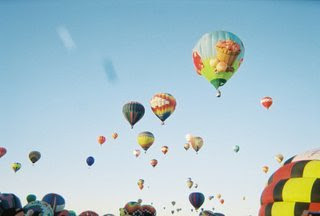 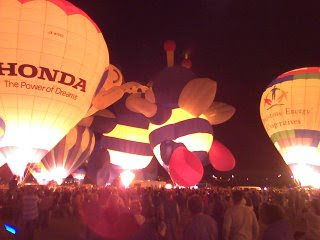 On the homefront with my kids, Jay has had some ups and downs. Mostly downs. He desperately wants his mom back home with him. Nina, well, I haven't heard from her in a few days, but I can only assume that things are ok with her. I haven't heard from Savage either, but he's never been a phone dog to begin with and I figure he's doing well. :)

Back in April, two of my scrapping buddies, Heidi and Lee, and I talked about how we wanted to open up our own Christian message board, along with Deb, Lee's cousin. There was some silly talk among us about being another set of Charlie's Angels and Heidi's husband could be Charlie, but I don't think he was up for it! LOL We have been working tirelessly on it since then (I say we, but it was Lee who did most of the work!) and although we're still a work in progress, I'm excited to announce that Angels Wings and Crafty Things has launched and it's doors are open to anyone interested in visitng a Christian message board with a focus on scrapbooking, cardmaking and stamping.

I did do some scrapping thanks to the DT. I altered a tin and clip board for AW&CT. Hush though, I can't post it until November and I was dying to show it off, so I did post it here. *blush* I've also worked on a chipboard purse and accordion album from 7Gypsies with some of the DT stuff, but am not finished with it. Can't wait to show it to you once I am done though! Maybe in a couple of weeks or so.

Have I ever mentioned that I work from home for my employer? Most folks think, wow, how awesome, to get to work from home. Well, other than getting to work in my jammies, ;) it's not all it's cracked up to be. I'm a social person. I find myself talking to myself and no one to share my funny thoughts with. Add in the frustrations over jammed faxes and constantly replacing ink cartridges and it's just not what I thought it would be. But, hey, lucky me, I get to work from home! 8) Oh, and one of the things I discovered since working from home; Friday mornings are landscaping days. There's about a half hour of lawn mowers and blowers right outside my apartment windows. Yeah . . . lucky me!!!

Oh, and before I forget . . . fall has officially arrived in Albuquerque and I LOVE IT!! It's . . . well, only one word can describe it . . . WICKED AWESOME! Yeah, I know that's two words, but in New England, trust me on this one, it's considered ONE WORD! There's lots of sunshine and pleasant temps. I've developed bad allergies since arriving in Albuquerque and this tends to keep me indoors a lot, but I love my morning walks. I'm thinking the neighbors I used to see at the gym, when I was foolish enough to be using the treadmill, see me walking around and are thinking to themselves that I found out the treadmill does NOT work! YES, I did, thank you very much! Anyway, the temps have been in the 70s and if it weren't for my allergies, I could open my windows to let in a wonderful breeze. And, in case I haven't said this already . . . I LOVE IT!

I think that wraps up this past month. I've not done much, seen much or talked to anyone. :( But next month, now that I know I want to share it with you, I'll do more! LOL! But only if you promise to keep checking back to see how I've been keeping myself out of trouble. ;)
Posted by StampNScrapJunkie at 10/19/2007 12:01:00 PM