I made this one for my sister who was recently widowed. I imagine it must be hard to overcome the loss of a mate... even more so if he treated you like a queen. My BIL did treat my sister like a queen. They were married maybe ... 40 years?  I know they celebrated a silver wedding anniversary and Nina was about maybe 9, 10 and she's 24 now, 25 soon. So there abouts, I think. This is a printable image. I added Liquid Applique that I bought at Raisin Boat on the soap bubbles and Glossy Accents on the bottles and the edge of the tub. I also added color with Copic Sketch Markers in Skin Tones I. I added three clear acrylic round shapes to mimic soap bubbles. The sentiment is typed from Microsoft Word using Quigley Wiggly font.


This one is for my other sister. I can not send one sister a card and not the other one... I just can't! So this is another printable image. I did write over the sentiment because it was not as clear as I would have liked. It was kinda hard to stay with the lines so once I was done I went back over it with Pebbles chalks to smudge it a little. I used Glitter Art on the polka-dotted background and rim of the printed art. The ribbon is from Michael's dollar bin and, of course, Robin's Nest dew drops finished this off quite nicely. Paper flower is from my long hoarded stash. :)

I made this card for a pen pal. We exchange one card per month with a theme in mind. This month the theme is ornaments. I was really torn about this one. I wanted to make an ornament. But I also saw this printed image and I LOVE IT! Again, I used my Copic Sketch Markers in Skin Tones I to add color. I used Art Glitter on the ornament shaped dresses. Ribbon and poinsettia are from Michael's dollar bin. Love those bins! :) Printed background paper is from Bazzill Believe collection. The banner is one I made using Microsoft Word with Edwardian Script font. 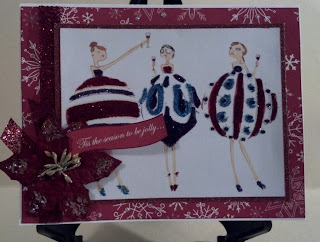 Finally I made this card for another pen pal who admitted in her last letter she loved shoes. When I saw this printed image it made me think of her. I used Copic Sketch Markers in Skin Tone I to add color to the hair. I used Art Glitter to bring some bling to her dress. I used a ribbon for the bow tie that is printed on the image. I used Glossy Accents to make the shoes shine and give them some pop. I also used the Glossy Accents on her large eyes. I used Robin's Nest Dew Drops. I added some Xmas Red Stickles for the nail polish. I added definition to her eyes with the multiliner in the Copic Sketch Markers in Sketching Grays. I had second thoughts with that when I was finished but by then the damage was done. It takes some getting used to. At first I thought it made her look scary like this but as I have grown to love the card... she's not so scary after all. :)