I've made myself homesick for New Hampshire. I was born and raised in Texas. I've been fortunate enough to move around. I've lived in three different cities in Texas... one large, one tiny and one medium-size a little big for its britches... we also lived in Connecticut, Colorado, New Mexico and New Hampshire. I finished raising my children in New Hampshire. They consider it home and so do I.

I didn't move around because I was running from the law... I didn't have a spouse in the military... I was not in the military... I... was... a single parent... always chasing the mighty dollar. I didn't move my little family thousands of miles from home because I was bored with my surroundings... each and every time... I was offered a position that would pay thousands of dollars more than I was currently earning and all I thought of... was about the things this would allow me to provide my children. I'll be truthful here... we moved to New Hampshire in May 2002... my children were 14 and 16... I was... exhausted! I'd moved our little family 2,000+/- miles from all we knew... I was tired of making all the decisions all of the time. What was I to do?

Despite all that... my children did see parts of the USA not everyone gets to see or experience. We went to several beaches on the east coast... trust me... not all are the same... New York City... more than once... historical Boston Commons... Maine, Vermont. In New York City we saw Times Square, Radio City Music Hall, Central Park, Statue of Liberty, Ellis Island, Ground Zero, Bronx Zoo... and so much more... some of these places were scary to visit. To get to the Statue of Liberty we had to hop on a ferry boat. I'm terrified of drowning. We did that twice! Going and coming back. Bronx Zoo is located... would you believe? ... in the Bronx! For our safety, we left at 5 PM. While walking to the subway,  we passed two men on the sidewalk... Jay reaches over to me, grabs my arm and whispers loudly, "Mom, don't look now but that man is selling a knife to the other man!" We almost made it out without my children knowing I had taken them to a "bad" neighborhood. I knew there were risks involved. I had faith God would watch over us and faith in my ability to maneuver around in the city safely. :) We saw a skateboarder in Battery Park with his hair up in a purple mohawk and his body painted in orange. He allowed me to take a picture of him with my children. I have that picture scrapbooked! We also saw a street performer dancing with an incredibly flexible woman. He twirled her and bent her in ways I was simply amazed at! Turns out it was a mannequin tied to his legs! It was a sight!

We were able to experience four seasons... fall, winter, spring and summer. We were able to experience fall as it should be... cool weather, apple picking, cider and doughnuts, hayrides, corn mazes and beautiful breathtaking scenery. I almost killed myself the first fall we lived in New England. We lived in Connecticut for two years and this is where we saw our first fall. As I was driving myself to work, I was mesmerized by the scenery before me and nearly drove myself off the road several times. Pictures can capture a glimpse of the beauty but until you are fortunate enough to see this first-hand you'll never understand just how magnificent it truly is.

This card is using the image Country Winding Road from Scrapbook Stamp Society. It brought back memories of those long winding roads in New Hampshire and Connecticut... it seemed only natural to color it in fall colors. The card stock and leaves are from my stash. I used Copics to color. I cannot even begin to capture the true colors of fall but I sure did try... 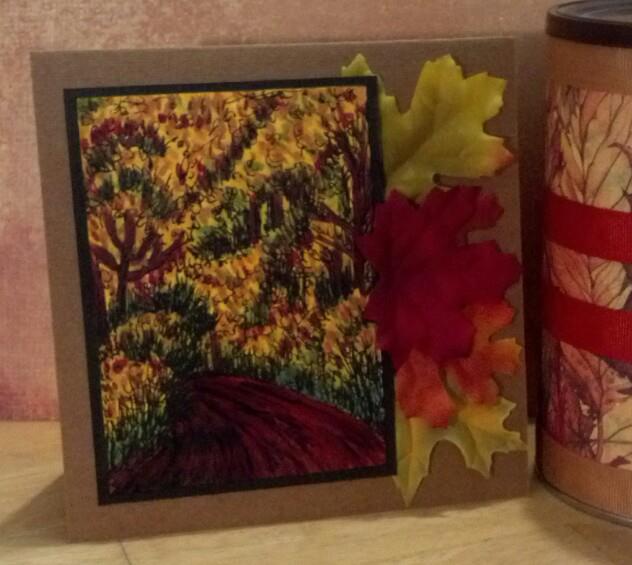