I was thrown Challenge #16 - Out with the Old... I kid you not... it was THROWN at me... by a group on FB. Challenge involves using something old or new from my stash with calm, spring colors. I'm ready to do that! :) The challenge is from Delicious Doodles and this is my take on it. :)

This is Girl Friends Forever from Scrapbook Stamp Society... an absolutely adorable image! Reminded me of a friend's daughter, Amber, up in New Hampshire and I decided to make her a pop-up canvas for her room... I called my friend, Donna, to ask about Amber's favorite colors and activities. Her favorite colors are pink and green and she loves to chase butterflies... so naturally! Amber is 7 now! I'm always amazed at how people change and age as the years go by... I know I change too... but I don't age... NOPE!! ;) I haven't spoken to Donna in over a year! We do communicate almost weekly... via email or an occasional text... but rarely by phone. Last time we spoke by phone was right after I emailed to inform her of my leukemia diagnosis. She called when she read my email and we spoke for hours on the phone that day just as we did when I called her this last time. What I love about my friendship with Donna is that we can go months without speaking and when we finally speak again... we pick up right where we dropped off and spend hours catching up. She's not ever told me she doesn't have time to talk. Whatever she was doing when I called... is not ever as important as speaking to me. I love her for that! When we lived in NH, she included me in all her family gatherings and did not ever make me feel like I was a third wheel. Maybe that is because she also invited all her other single friends and there were way too many people to feel like the odd girl out. God bless my dear friend, Donna.

I used Copics to color the image. Background paper, brad and card stock are from my stash... so this stuff is old... :) I used EK Success Dahlia Dimensional Flower Punch (DDFP) and the Butterfly Layering Punch. By the way, the DDFP... it's new to me. :) I almost went crazy and bought myself all of the EK Success flower punches with my Christmas money... but I stopped after one... there were LOTS of other things I "needed" and I only had SO much cash... ;) ... that's the thing with cash... it runs out. :( I had to FORCE myself to stop with six butterflies! Forced. Myself! I also used Snow Crystal by Stampendous on her petticoat because I've said before... petticoats shimmer in my "Ema-gination"! ;) lol 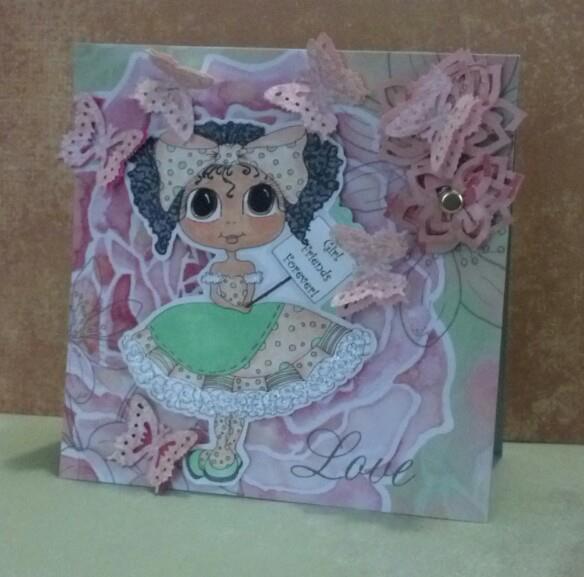 Doesn't it make you think of spring? I love how she looks like she's nestled into the flower.