Before I get into this... I made this card for an Anything Goes Challenge at Delightful Challenges. :)

I have two things I want to tell you... this card was inspired by two events in my life...

I flew up to New Hampshire to retrieve our possessions out of storage. Paid over $3,000 for the trip... airfare, truck rental, movers, gasoline, meals, hotels... paid over $3,000 to store these same possessions for two and a half years. When we stored them in March 2008 to move back to Texas... I only stored things that I absolutely loved and had a great deal of sentimental value... things that you can't put a price on. Well... we can put a price on our possessions... they are now valued at over $6,000... :-\ lol

Driving back from New Hampshire... All. By. Myself... over 2,000 miles... All. By... :) In case you'd forgotten already! ;) There were many thoughts that ran threw my head... I'd already survived the November 2009 automobile accident I posted about back in November 2009... makes sense huh? :) So there were many, many things I contemplated on the long drive... which by the way... was four and a half days because I wanted it to be four and a half days. :) So I think I arrived with my head screwed on a little better than it had been before... and my head was screwed on a little bit better after the accident... now... I was diagnosed with leukemia AND am in remission... I think my head is screwed on even better! I'm wicked awesome... AND... I'm sprinkled with glitter! ;) lol I read that somewhere... so me! :) But I'm getting off the subject... what I wanted to point out is that on the drive back... through many states... I saw lots of majestic beauty the Lord has given us... if I had to summarize the rolling hills of broccoli... the fields of gold as far as the eye can see... the background paper I chose to use summarizes it for me... because I couldn't. I write the rolling hills of broccoli... the fields of gold... because this is what I was reminded me of... what I drove through were the rolling hills of evergreens through the northeast... the gold were the fields of wheat across the central states... Majestic! I tell you! It made me wish I was a poet. :) What I got out of this experience... I AM a strong woman... I can do anything I want with my life... AND... I can do it alone if I have to.

Second, is the image of Pretty Pet Besties Halie and Harley from Scrapbook Stamp Society reminded me of a dear beloved brother-in-law, Clyde, who passed away recently.

Get this... my sister, Lilly, and Clyde along with their daughter and her husband... went to the watermelon festival in a nearby town on a Saturday. He stopped to buy a snow cone... then he tripped over a mini hay bale used to control foot traffic. Hit his forehead, suffered a sort of whiplash injury, was taken by ambulance to the nearest hospital, transported back to one of the huge hospitals in our city, was scheduled to have an operation to "fix" the whiplash, his kidneys and liver started failing... but Lilly was given hope... put Clyde on life support and have a PICC line inserted for medication that would improve his condition for the surgery. So she signed the necessary forms... I went to the hospital to see him but was unable to... only got to visit with Lilly. Clyde was having the PICC line inserted when I arrived. He passed away after that procedure... NOT because of the procedure... his kidneys and liver failed and he slipped away. I should point out... he was a large man... over 6' tall... and a wide body... I couldn't even begin to guess how much he weighed but there are pics of him on my blog... big man. I wouldn't want someone to go away thinking PICC lines are dangerous. I had a PICC line when I was hospitalized with the leukemia. He didn't die from the PICC line... he died because of his failing health. The accident only contributed to it in that it brought the death on quicker. He'd not been well for a few months. He was struggling to get through life. I think death gave him peace. He may not have wanted it... I completely understand that. I don't want to die either... but I also know... I would go be with our Father... I've had a hard life... I'm ready to go home. I don't know if Clyde was ready... I hope that he was and that he has peace now.

While he lived... he was a larger than life man. He lived his life to the fullest. Did many things... served in Vietnam... raised four children with my sister, two as if they were his own, two were biological sons... operated his own businesses... was in a motorcycle club. He rode a Harley... he and my sister would go on bike runs... dressed all in black... I wish I had pics to show you. They were a sight to behold! ;) lol When he had his Harley... I traveled to Texas when moving from Connecticut to Colorado... I suggested getting a moped so we could go "cruising"... it was not met with the laughter I thought it would... I thought it was a GREAT idea... :-D lol

My point to all this... life is so very precious and so unpredictable... one minute... eating a snow cone at a watermelon festival... the next... laying in the hospital with tubes every where... one minute... thinking it's just a little headache... instead diagnosed with leukemia... we don't know what's ahead... live life to the fullest... capture all the experiences life offers while we can... you can be stronger than you think you could ever be... say "I love you" to the important people... ignore the unimportant... we will always encounter people who judge, criticize, gossip, refuse to understand or are just mean, angry people in our lives... get away from them! Life is short... too short to spend it with negative people who insist on sucking the happiness out of life. These are just my thoughts... but it's also a post floating about on Pinterest and FB. :)

So this card has so much meaning to me... :) I used background paper from Hot Off The Press (HOTP)... I don't remember the name of it but I do remember getting it from HOTP... the stamps I used in the background are Fast Lane from Raisin Boat. I did a fussy cut on the image and mounted it with foam tape so it pops off the paper... oh... and on this one... I did NOT use Crystal Snow... she didn't need it! She's awesome all by herself! :) I love how it came out and I think I'm keeping this one for myself... it symbolizes all those things I've written about... it has meaning to me... 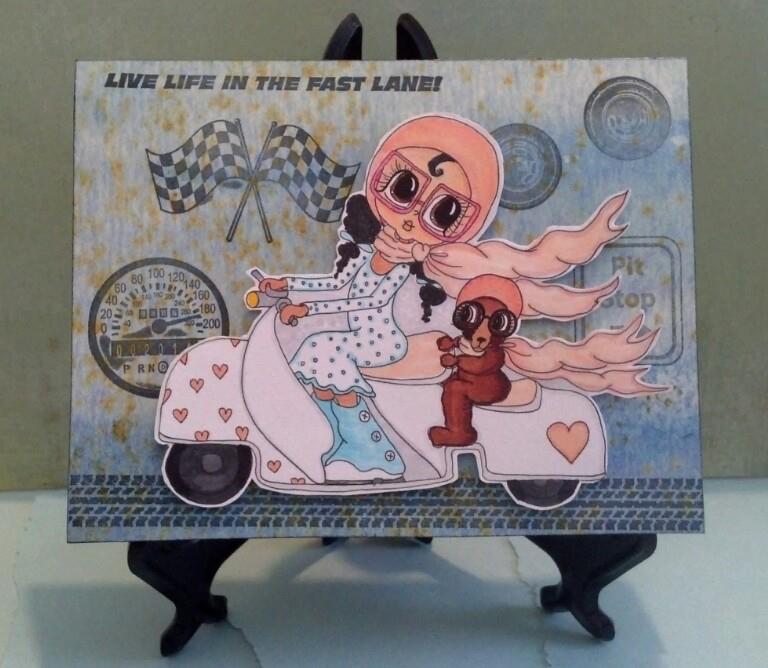