I made this card for my son... did not start out for a challenge... just a birthday card he wanted for one of his friends.

I did find two challenges! :) One at The Craft Place Challenge. They are having a New Year-New Goodies challenge. I bought the image last night to make this card. :)

Lia Stampz is having Challenge 33 - It's a Celebration! That what the card is for! We want to celebrate Nick's birthday... a little late... but we are expressing this with the card. :)

My son is a HUGE comic book fanatic. He participates in the annual comic book expo held here in the spring. He's won three years running Best in Show for adults.

He created his own super hero whom he calls IceWolf and made the costume out of duct tape and cardboard... several types of cardboard... we've collected cardboard for quite a few years! Each year the costume has evolved.

When we lived in New Hampshire, we made a video and applied for SyFy's Who Wants to be a Superhero? Needless to say... he did not receive the much anticipated call... :(

When we moved here in March 2008, we had to leave the first costume in storage. When people meet Jay, they quickly discover his passion for superheroes. One of his co-workers told him about the comic book expo and Jay went for the first time in the spring of 2009. He came home VERY excited about what he had seen and immediately started working on a costume to replace the one we left in storage.

He won two years running with that second costume. The second year he made some modifications to improve the look. The costume for the 2012 Comic Book Expo is the third one he's made and the best so far. I have pictures from 2012 Comic Book Expo and the costume looks a lot better than I could possibly describe it to you... here... I'll show you... 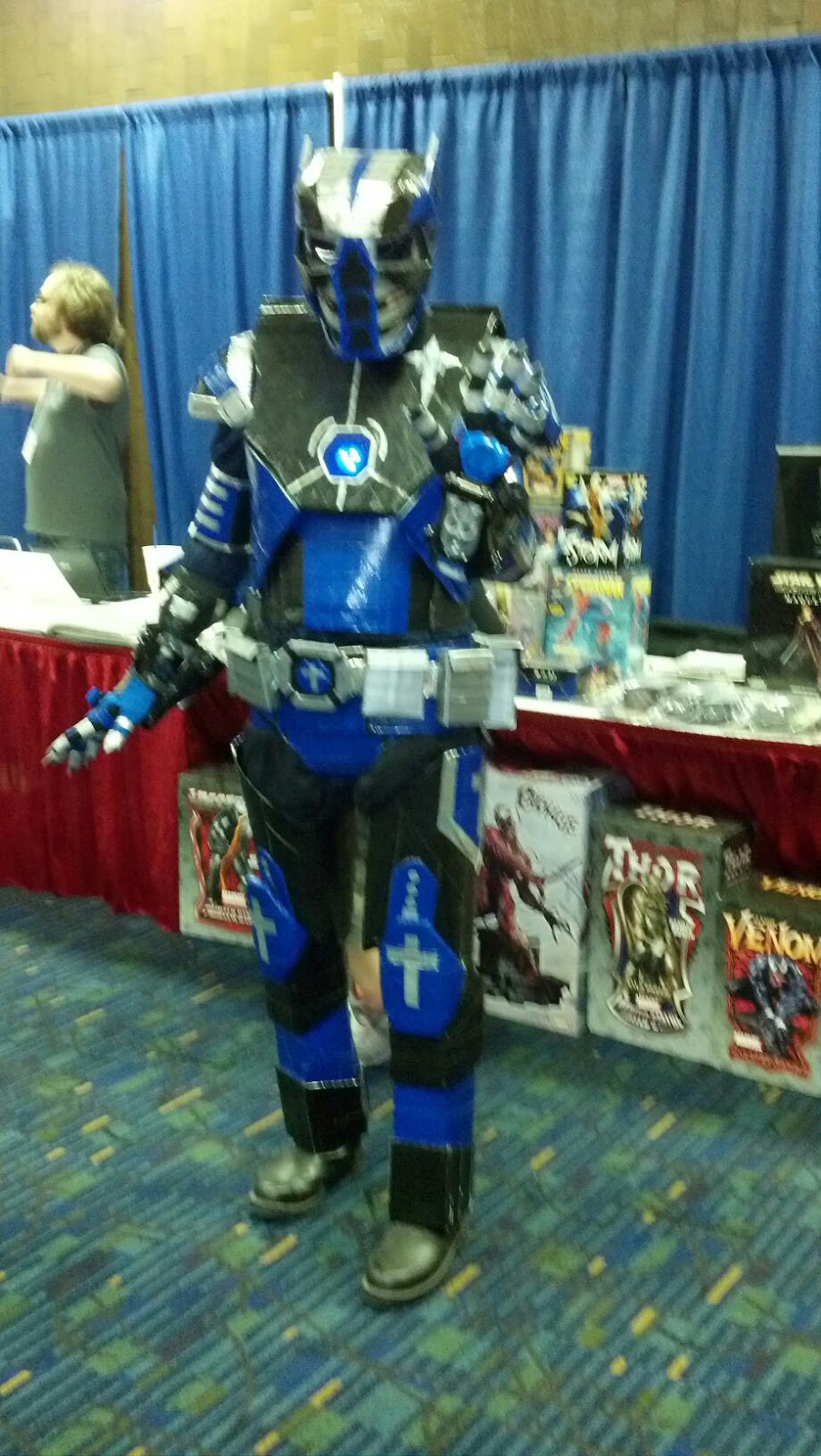 Here's another picture to show you he's not the only one who goes all out for this event... 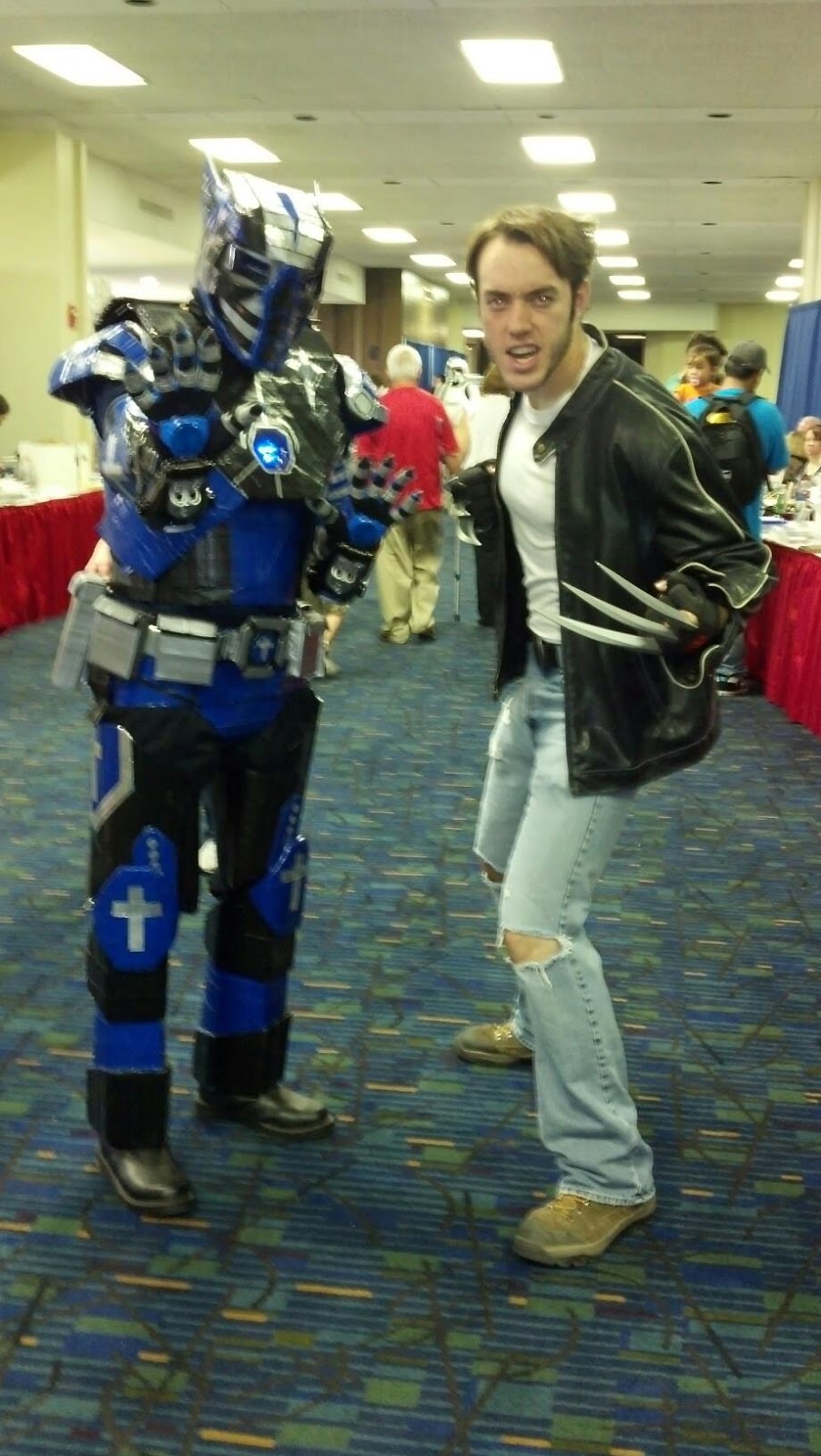 Here's a little girl who asked to have her picture taken with him... he gets quite a few requests from young children and he actually draws a crowd of children interested in watching him pose. 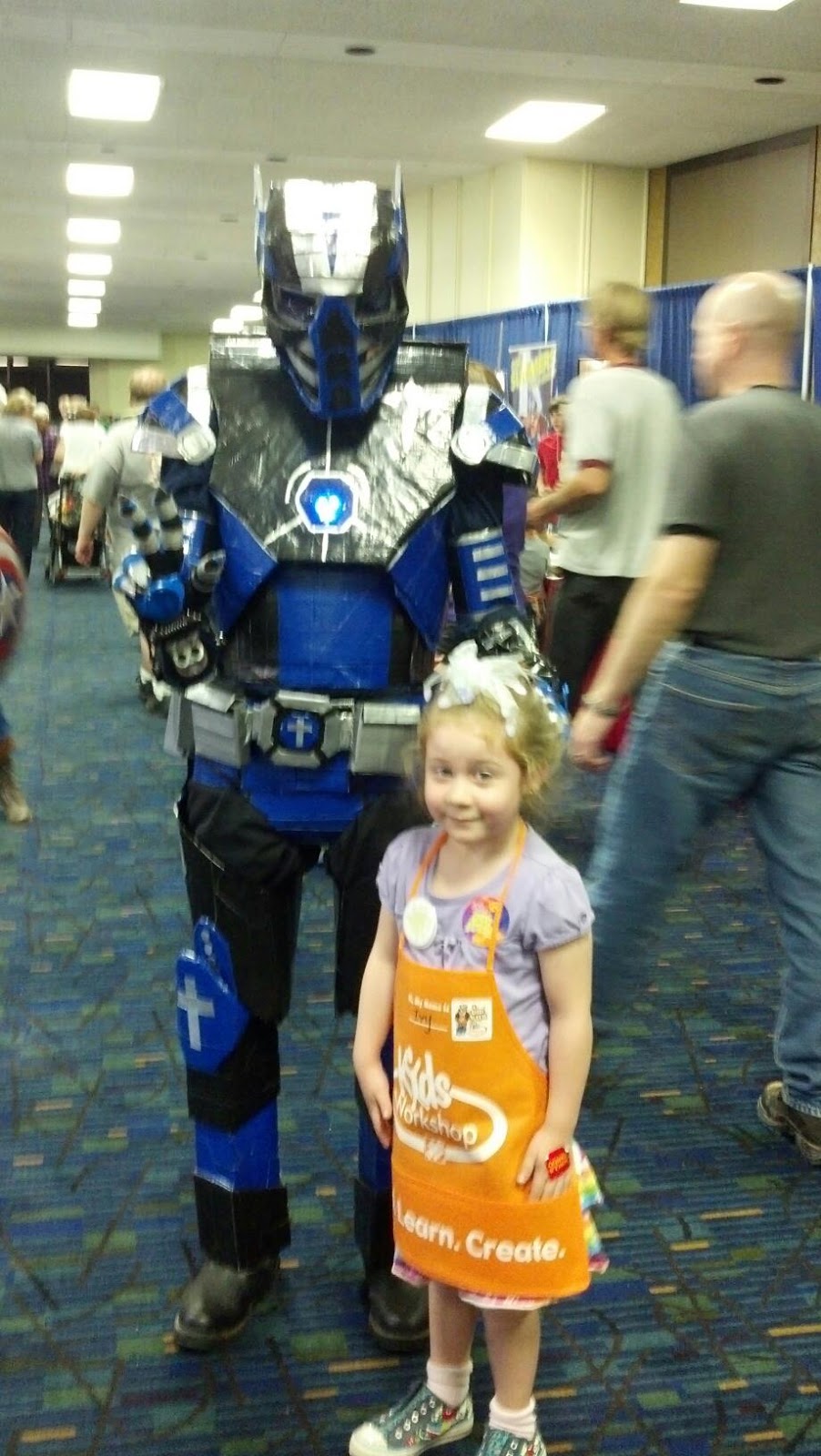 As the little girl walks away, she tells her mother in a very excited voice, "I got my picture taken with blue Power Ranger!" lol He does get asked that a lot...

Here he is on stage showing off for the judges... 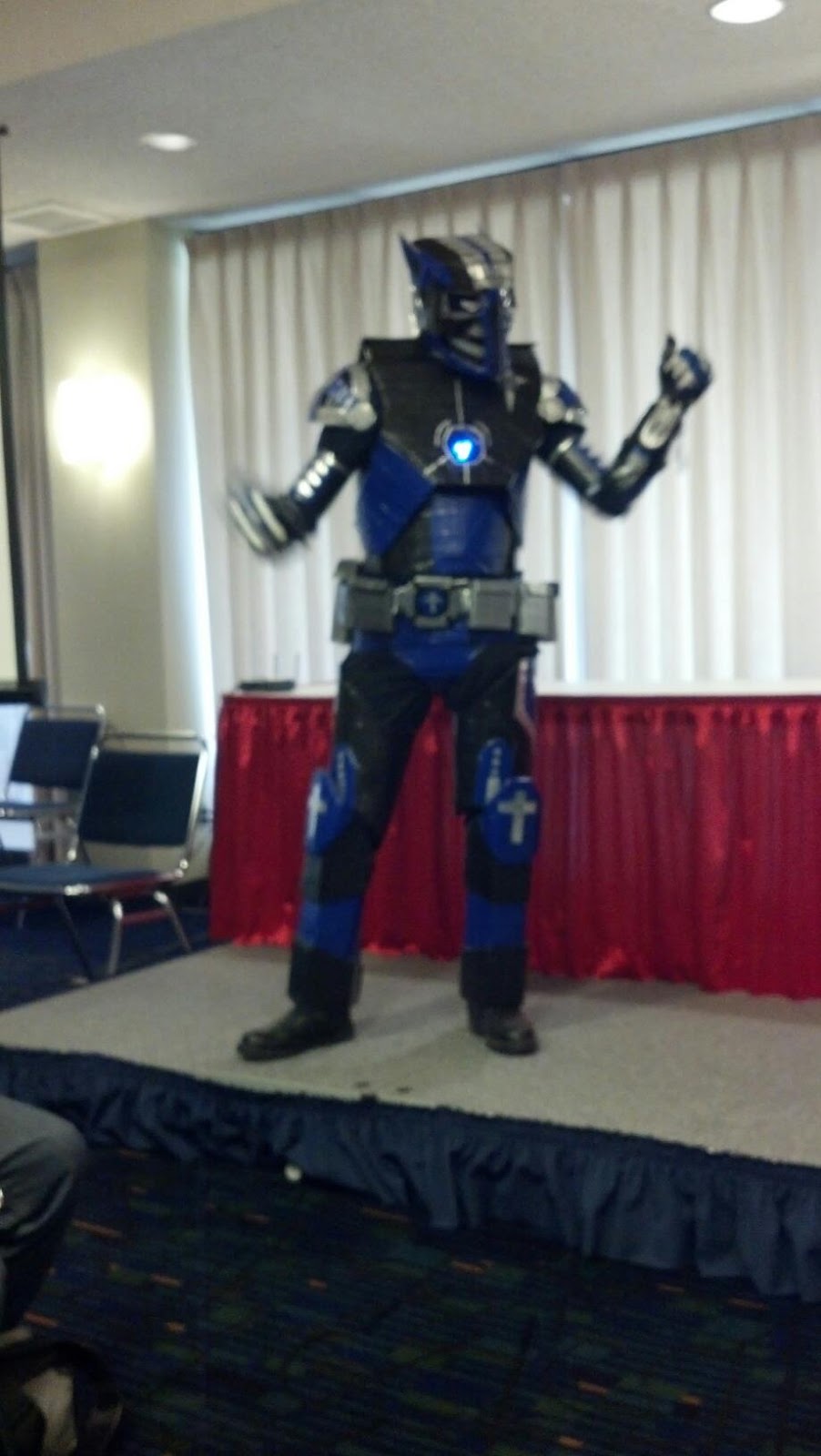 Jay gets recognition for being IceWolf at the comic book expo in our city. He's actually famous! lol He is on a first name basis with someone here who has actually been printed in comic books. lol I remember I was quite awed when introduced because I recognized the name and I am NOT a comic book fan. He's been in the local news because he owns a comic book store here as well.

After the 2009 Comic Book Expo someone invited him to a Sketch Club that meets every Saturday and Tuesday nights at local restaurants. The first time I dropped him off at the restaurant... we'd only been here a little over a year and he didn't know his way around... he was excited about his evening plans. When he got home that night... he was VERY excited and informed me he was recognized and once they realized who he was, he was eagerly welcomed into the group. :) lol

Jay has made some very nice friends through this group of young people. For that I am very grateful and I encourage these friendships. Two of these young men have become frequent guests at our home... Nick and Robert. Jay thinks very highly of both of them and they of Jay.

It was recently Nick's birthday and Jay informed me after the fact that he would like to have a late birthday card for Nick but something that he would appreciate in his field of interest. So I did some research based on what he requested and I found an image at Kenny K Downloads that I thought fit the bill. I didn't tell Jay what I worked up... instead... I waited until I completed the card and showed it to him. Jay was very pleased and he believes that Nick will like the card. This is COMPLETELY out of my norm. I was incredibly intimidated attempting to make something per Jay's request. I used Kenny's Dragon Rider image and this is what I came up with...

This is the colored image:

These are the Copic markers I used to color the image:

This is how I put the card together: 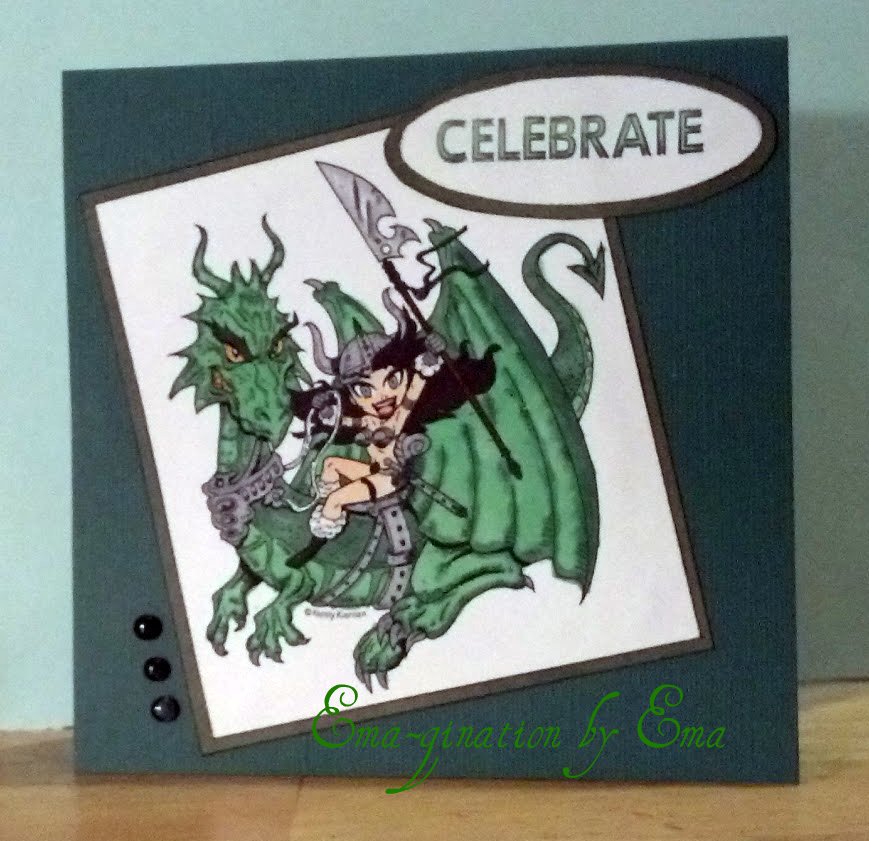 I used card stock and Robin's Nest dew drops from my stash and the sentiment comes from You Said It! at Raisin Boat. I made the label using Design Tool 2 from HOTP. I find it incredibly difficult to make a masculine card. I want to add glitter, sparkle or shimmer! :) lol So I guess it did not need to be a challenge... but it was! :)