This is May's freebie image for the Birdie Brown monthly challenge. It's called DIY Dad.

I actually thought of skipping this month's challenge. My birth father abandoned our family shortly after I was born. My mother's second husband raised me and he is who I grew up knowing as Dad. He fed and cared for me. Most importantly... he taught me the morals I chose to live by. He never treated me like a step-daughter but instead I grew up feeling loved. He passed away December 21, 1983. So I really don't feel I have a reason to make a Father's Day card.

I do have four brother's. All are over 12 years older than me. All my siblings were married and out of the home by the time I started developing a personality. So I grew up as an only child among my nine siblings. lol If you can understand that. I've not been really close to any of them but I love each and every one of my siblings.

My oldest brother, Gilbert, is over 70. Now that he's reached that age, he does seek me out. I think it is because his girlfriend likes me and she wants to see me. Even then, I rarely see him.

My brother, Fred, who, for the most part, helped my mother raise me as an infant when our birth father abandoned us but I don't remember this. All I know about that time is what my mother has told me. This same brother stayed with me for awhile when he was going through a divorce and was one of two uncles my children got to know. I think Fred is in his late 60s or just turned 70.

My brother, Manuel, is a Vietnam vet. He was exposed to a grenade explosion and was severely burned so he was honorably discharged. He's always reminded me of a very tan Alan Jackson. He's also my tallest brother and in his late 60s.

Height doesn't run much in our family. I think Manuel is probably 5'10", Gilbert about 5'8", Jimmy about 5'6". Fred currently sits at about 4'+. He lost both of his legs to diabetes and is confined to a wheelchair. When he did stand, he stood at about 5'4".

Jimmy is the "baby" brother by default. Our youngest brother, Jesse, died when he was 16. I didn't get to know him. I was about 6 years old and have no memories of him at all. What I know about him is from pictures and family member memories. So Jimmy became the "baby". :) He is the other uncle my children grew up knowing.

He is a painter by trade. Manuel is and Gilbert was an independent roofing contractor. During one of Jimmy's down times, he helped either brother with their crews. On one occasion, he fell off a roof. All my brothers have fallen off roofs. They've all jumped up, dusted themselves off and got right back up on the roof and then would entertain us at family gatherings with their latest escapade. lol This one time though, Jimmy broke his hip. He was unable to work for months while he healed.

He stayed with my mother a bit. My mother is not known for her patience and when it wore out, I asked Jimmy to stay with me. He did for about six months. When he did move out, it was because he was able to work once again and he wanted his own place. For a time, I was employed with a company that sent me out of town for training once a month for a week. Jimmy stayed with my children whenever I went out of town. Jimmy and his first wife, gifted me my first bicycle the Christmas I was eight. For this reason, I'm the only one in my family who knows how to ride a bicycle. I love riding a bicycle!

Because he was a painter, I could always count on him to paint whatever home I was in. He never asked me to pay him. I was a single parent. He also painted our siblings homes... but they paid him. He was also my handy man on occasion. I'm very independent. Whatever fell apart in my home, I'd always attempt to fix on my own before I called him. Sometimes... I even amazed myself with my handy work! ;) Sometimes though... he'd have a funny story to tell at our family gatherings... much to my embarrassment of course! Jimmy lives in an efficiency apartment Lilly, our oldest sister, has behind her home. I once offered Jimmy our extra bedroom rent free but he declined for whatever reason. Jimmy is 63 years old.

I found out his age yesterday because I attended an appointment with him. He had this appointment with an oncologist. Jimmy had originally gone to see a doctor... I think it was back in April. He developed a cough after a bad cold and it kept getting worse. He finally went to see the doctor for what we all thought might be bronchitis. Instead, within weeks, he had a biopsy in a lung and was sent to see a specialist. When he went back to see the specialist for the results, Lilly went with him. They were informed Jimmy had kidney cancer. The option from what Jimmy and Lilly informed the rest of us, was surgery to remove the kidney. Jimmy; however, refused surgery. He wanted to be treated with medication. For whatever reason... this is all the information they pretty much left with and reported to the rest of the siblings. We all wondered why there was a biopsy in the lung and he was diagnosed with kidney cancer. No one knew why.

Well, I like to research things. When I don't understand something, I run to my computer to explain it to me. I will read a minimum of five articles to make sure I'm getting accurate information. What I found out was disturbing to me. I did not understand why Jimmy was taking oral chemotherapy and why Lilly was so calm about it.

When I arrived at Lilly's house to pick up Jimmy, I went early because I felt I HAD to share what I knew with Lilly and she could help me decide if Jimmy should be informed beforehand. I explained to her there are four stages of kidney cancer. Stage I is isolated to the kidney. Stage IV has metastasized and spread to other organs. Chemotherapy is NOT an option at Stage IV because it will do almost nothing for the cancer. Surmise to say, kidney cancer only has a good remission chance at Stage I. However, I know MDs will always treat the patient as the patient wants to be treated. Jimmy wanted to be treated with medication. I wanted more detailed information about what was said at the appointment she attended with Jimmy. It was filled with optimism and plans for treatment; however, they did want Jimmy to bring a family member to the following appointment that could help him understand the prognosis and make decisions. After much debate, it was decided I should go with him. I am in remission from CML. I am college educated and I would understand the medical jargon and, according to my siblings, I would know what questions to ask because of what I'd been through and I'm the smartest of the bunch. Doesn't that make you sad? lol

So the oncologist confirmed what I'd already read. Jimmy is in Stage IV kidney cancer. Surgery is NOT an option. The chemotherapy is an attempt to keep the cancer from spreading further than it has. If this particular drug does not help, there are other "new" drugs that can be tried. The kidney has metastasized to the lung and it is in the lymph nodes and when I heard that... I knew it was bad. Finally, patients with this diagnosis have a life expectancy of two years. Some go sooner, some last a little bit longer. All the information that was shared yesterday had only one final message. Jimmy is going to die. The only intervention we have now, is a miracle from God. We are, of course, praying for that.

It was kinda of a slap in my face for different reasons. First, I'm gonna lose my brother. Then... I've been feeling really sorry for myself of late because the Sprycel I take to keep me in remission from leukemia has put me in early stages of heart disease. My life expectancy with CML is 10 to 30 years. I felt sorry for myself because I've lived with this diagnosis for about a year and a half. If it isn't one thing... it's another. I'm sick to death of being sick! My original thinking was geez... I have 10 to 30 years of THIS? I even thought about stopping my medications. The only reason I did not is because of my son. He's still very dependent on me. He has trouble understanding money. He cannot make rushed decisions. I feel he's not ready to be without his mom. He's the ONLY reason I continued taking my medication. After yesterday's news... regardless of all I go through... I will continue to live! Not once have I been told heart disease is an immediate death sentence. I could live with the heart disease 10-20 years with proper treatment. WHAT do I have to complain about? All I've been doing is having a pity party and from what I can tell... ENJOYING it! :( I have NOTHING to complain about.

So... as I was looking at this DIY Dad image... thinking of Jimmy... it reminded me of all those times he's been a good brother to me. So I made this card... to thank him for all the times he's helped me when he didn't really have to. I love my brother... it grieves me what he's been through and will go through. He told me once he'd like to see NYC. I wish more than anything, I could gift him this. Instead, I'm gifting him a card... lol... with lots of love and appreciation for helping me when he did with no expectation of payment of any sort. 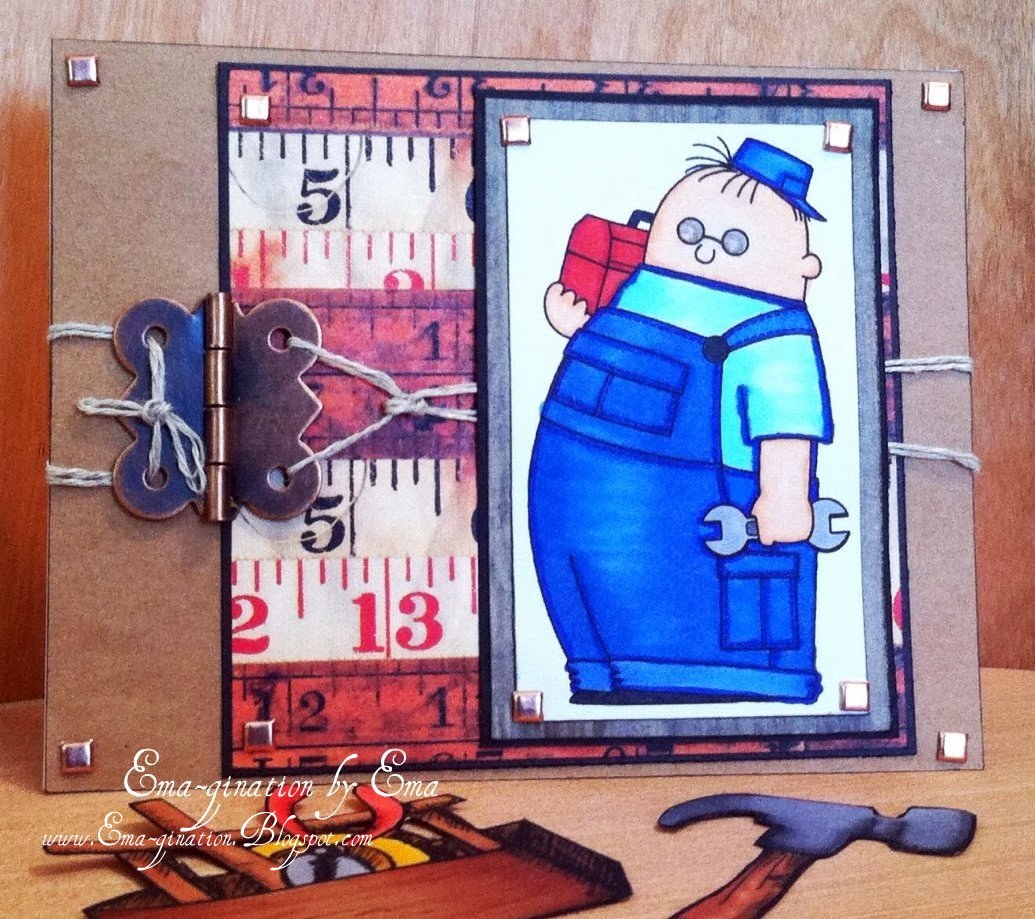 All the supplies are from my personal stash. The images in front of the card are from Tiddly Inks Carpenter Jane. All images are colored with Copic markers. The cording on the hinge will remind him of an inside joke between us. lol Suffice to say... he did have a VERY funny story he could have shared at a family gathering but he promised he'd keep it between us and as far as I know... he's not ever shared THAT particular story... and it's a whopper of a funny story! :) lol