For the longest time, I didn't know what that meant... I kinda got the idea during the movie "Jaws" when Richard Dreyfuss' character is unable to spit into his eye mask when he's about to enter into the water with the shark. Once I knew what it meant, I found I hadn't had that experience. Not to say I haven't had scary experiences... trust me... I've had PLENTY of scary moments during my life time... to name a few... a missed period... becoming a mother for the first time... purchasing my first brand new car... purchasing a home... but not scared spitless. Till... today...

I decided to fussy cut... right down the the very line! :-O Yes! Then... there are protruding lines on the image's spikes! :-O I was so scared of cutting one off. Especially... since I'd already spent time coloring and sparkling the image. I actually did end up cutting one off. It was right at the end. I guess I was feeling kinda cocky by then. :-\ But I fixed her up and I don't think you can see it. :)

I am participating in Simply Betty Stamps Facebook Fan Page Challenge. Each month, Generous Betty... who calls herself Betty QueenofHalloween Roberts, but I always think of her as Generous Betty... ;) ... gifts a digital image and as long as you make a card and participate in the challenge, you can continue receiving a new digital image each month. How awesome is that? I love it! Freebies that is! ;) lol I don't think the price of making a card to play along in a challenge is too much to ask for either. I'm surprised by how many people request the image each month. Not as surprised as how different a number there is in the amount of participants. :( I guess people take advantage in all corners of the world... including crafting world. I've always thought girls in the crafting world were a step above all others. Super kind, rule-following girls. Boy howdy! Have I been corrected on that front!! :(

So let me get off my high horse and show you my card. First a sneak peak: 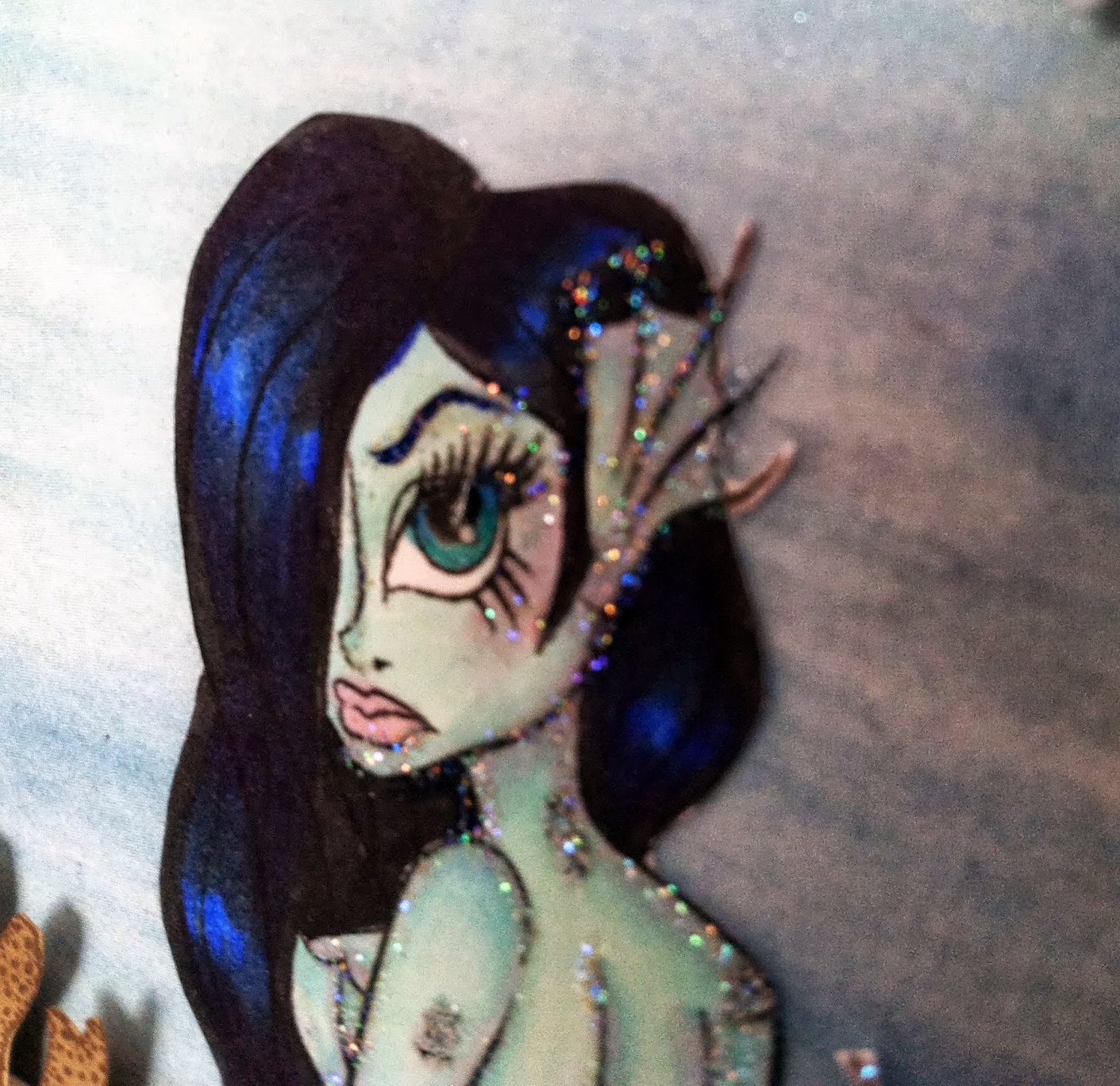 I colored the image from Simply Betty Stamps with my Copic markers and used the colors black and blue on the hair! Doesn't it look awesome? Yes it does! ;) The middle spike is what I cut off by accident. Can't tell huh? :) You would not have known if I had not told you! :) Her eyes begged to be turquoise and I used Glossy Accents to make them shine. I also dabbed the entire image with Stickles in Star Dust and Baby Blue. This is Spika, the "bad" mermaid. I don't know... she looks more mad to me than bad. I figured it's cause she's been banned to the bottom of the sea. Don't you think that's where "bad" creatures live at? ;) I do! lol 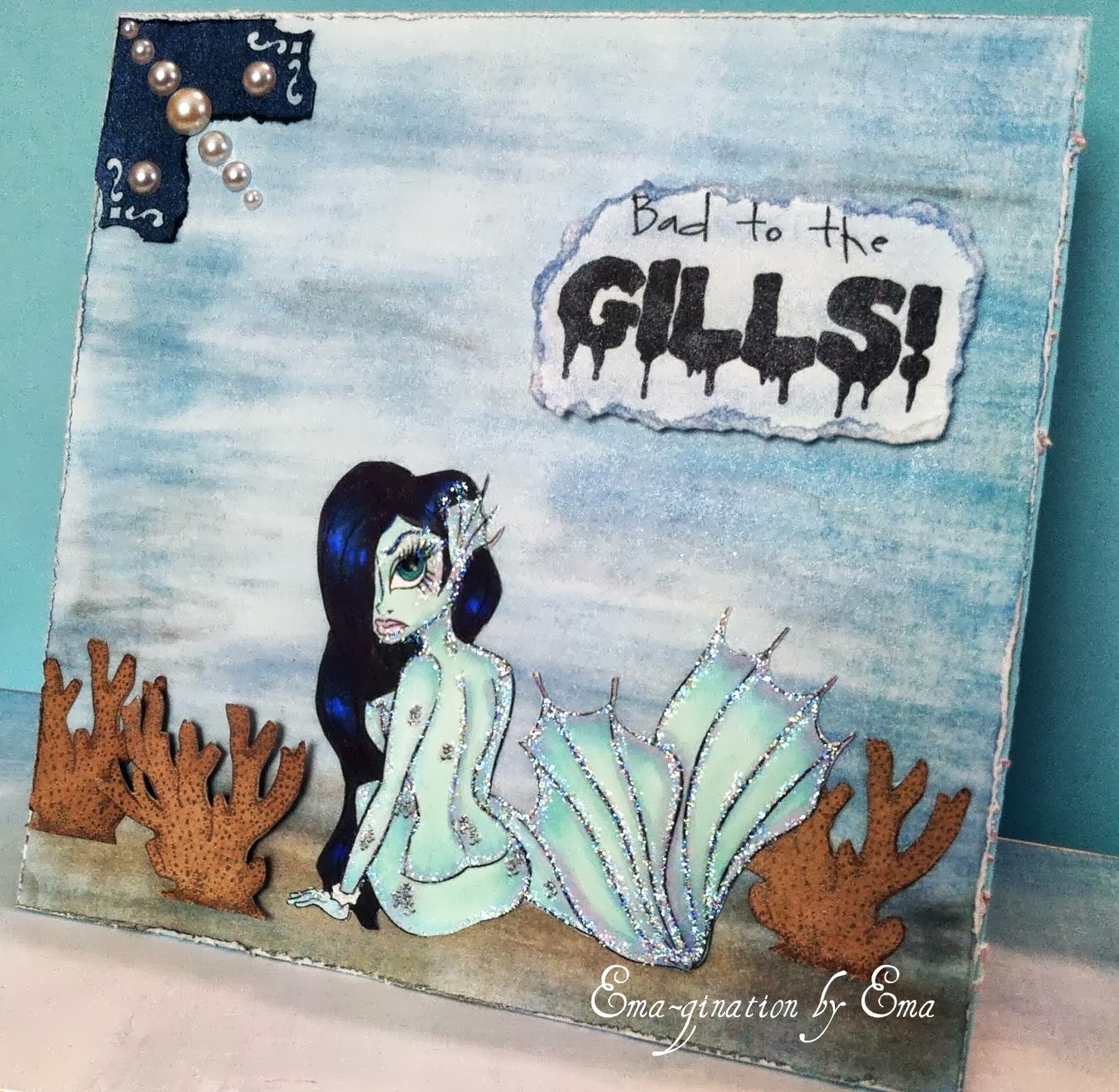 It's much darker in real life. I used a pale blue card stock and then streaked darker shades of blue chalks with my Pebbles Inc. I'KAN DEE Chalk Set. I tried photographing the card at different angles but this is the darkest I could photograph the card. :-\ Don't you just hate it when your camera won't cooperate? Especially when it's a phone camera! ;) lol I. Need. To. Buy. A. Camera! That's all there is to it. :-\ All supplies are from my stash. The sentiment comes with the image.