My DT project for this week's anything goes challenge at Inspiration Destination Challenge Blog. 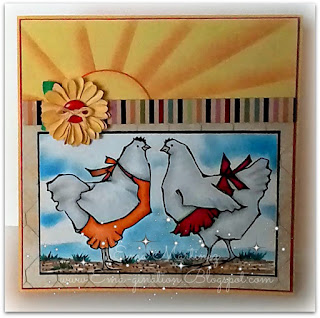 Here's a closer look at the image. 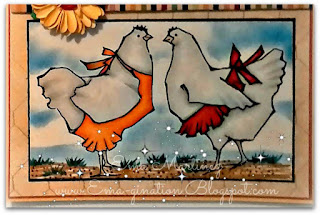 Here's a peek at the inside. 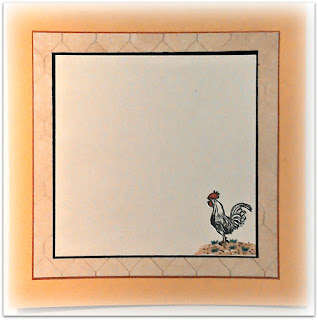 I've merged two images from A Day for Daisies to create the scene, Amy Hen and Mary Hen. I created the blue sky and sun rays with Pebbles, Inc. chalks. I colored the images with Copic markers. I made the flower with a Michael's daisy punch and a button with embroidery floss from my stash. The chicken wire paper is from Michael's Recollections Rooster Provincial paper pad. The striped border and all card stock are from my stash. The small stamped rooster is from The Stamp Pad Co., Inc. and was a gift from a former crafting buddy.
I printed up two sentiments to use with the card and I'm having the toughest time deciding on two things. First, which sentiment to use and second, where to put it on the card! Should it go on the front or on the inside? I've printed up in Word "Let's cross the road and freak everybody out." and "Let's cross the road and give the humans something to think about." I also have a freebie sentiment from Create with TLC that reads "Rise & Shine" and I thought of putting that on the front and one of the two sentiments on the inside, but again... I'm having a spell trying to decide which sentiment! :\ lol What do you think?