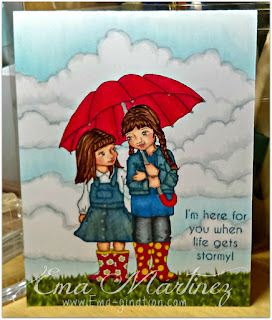 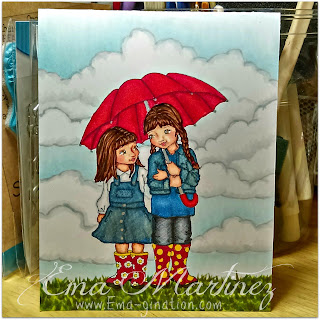 This rubber stamp is from Wags 'n Whiskers Love You Sis. The sentiment is from Look for Rainbows at Kraftin' Kimmie Stamps. I've colored the image with Copic markers. I usually use chalks to create the clouds but I am becoming a brave girl now and using Copic markers more often but I still regularly continue to use a cloud template I found online from Bev Rochester of All the Things I Love. I'll be honest. I didn't watch the video. I kinda just winged it but I do use her template. I've found it to be very handy! :) I also used a tutorial I found at Some Odd Girl for making the denim look worn on the dress and jacket. I thought these came out pretty good for a first attempt. What do you think?
I'm rather pleased with the final outcome so I've got to share this in a few challenges! I hope I can find some! lol
I'd like to enter my finished card with these challenges:
613 Avenue Create: Challenge 195 Anything Goes with Optional Twist - No Digis (1E/8E)
Penny Black and More Challenge: March - Anything Goes (1E/3E)
Sweet Stampers Challenge Blog: Challenge 4 Add a Sentiment (1E/3E)
Retro Rubber Challenge Blog: Challenge 57 In Living Color (I've had the stamp since 2014)
Thank you all for stopping by!
Posted by StampNScrapJunkie at 3/05/2017 10:13:00 AM