These are some cards I have made in between holidays and seasons that are my favorites and I would like to share! 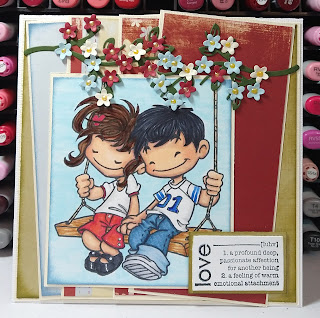 This is a stamp from Whims of Joy called Forever Friends that is probably discontinued since I have had it forever and I cannot find Whims of Joy now. I colored the image with Copic markers and silver and white gel pens. I inked the edges of the blue papers with TH Stormy Sky, the burgundy papers with Picked Raspberry, the green papers with Peeled Paint and the cream colored paper you can barely see with Antique Linen oxide ink pads. The diecuts are from La-La Land Crafts April 2016 kit. Sentiment is from an old stamp set that I cannot remember where it came from! Doh! LoL The papers are probably discontinued and I no longer remember the designer name because I have had that since 2006 as well. Oops! I think I have mentioned, I am on a mission to utilize all my old crafting things and all my digital stamps this year. I could probably make a really good dent into it if I would QUIT buying more stuff! 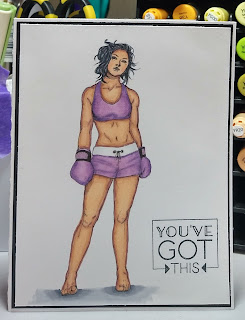 This is a digital stamp from Morgan Fitzsimons colored with Copic markers (she was not the artist, it was an image I picked up when I was on the DT there). The sentiment is from Kraftin' Kimmie stamp set called Happy Thoughts! 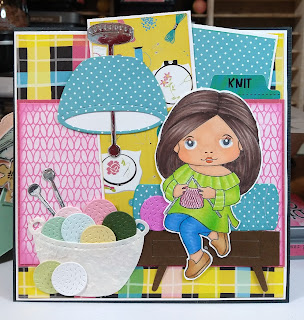 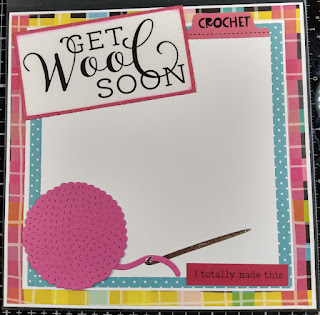 I found out a FB friend had a heart attack last year and was scheduled to get a defibrillator on the 3rd of March. I left social media back in September 2019 so it has been hard to keep up with online friends. Anyway, my heart went out to her! Thought I would make her a little something something.
I once bought a beautiful yarn scarf from her that she had made with her own two little hands! Not being familiar with how that works, I could not figure out if it was crocheting or knitting... LoL... I only know paper! So I did double duty with this one!
This is a rubber stamp from La-La Land Crafts called Knitting Marci. It was the December 2020 kit. I missed buying it as a club plan so I had to fork over bigger bucks to have the set because I. Had. To. Have. It.

I purchased the Yarn Basket and Knit and Crochet dies that go with it. I used mulberry paper for the basket to give it some texture and look like one of those awesome fabric baskets Amazon has tons of. I also purchased the knitted panel that is part of the set but I could not get it to cooperate so I went with this awesome Hero Arts Knitting Pattern rubber stamp for the BG that I found on Amazon. I used Tim Holtz distress ink pad in Picked Raspberry to stamp the image and ink the edges for a bit of a distressed look. I then colored in the stamp with a Copic marker to match the pink yarn she is knitting with! LoL YES! I put too much thought into this! The paper is from PhotoPlay called Crafting with My Gnomies. I colored Marci with Copic markers. She is sitting on a table (retro desk) that I made into a sofa from the La-La Land Crafts September 2020 kit . I also used the lamp from that set to make cushions for her to rest her back against and to act as the hanging fixture for the lamp I made from the yarn basket die by turning it up side down, cutting off the handles and using one of the knitting needles as a pull chain for her lighting needs! LoL I already said... I spent way too much time thinking this through! I emphasized the knitting of it all on the front and went with crochet for the inside. Sentiment is from Power Poppy by Marcella Hawley called Get Wool Soon digital stamp set. 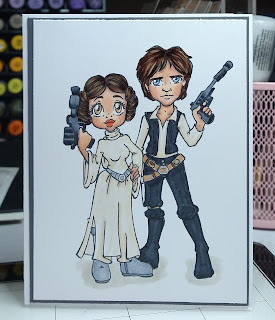 This is a digital stamp from MazyArt, I believe was the name of her shop. She's long gone. I cannot find anything recent for her. Other than blogs who have featured her images. I really liked her images. I thought they were super cute! So this is Han and Leia. I thought I had number die cuts and planned to die cut the number four in black and gray and layer it to the side of Han but I guess I only dreamt of buying a number set! I colored the image with Copic markers and a silver gel pen. I believe this is what is called a CAS card... but not sure. In any event, for me... it is a CAS.
Posted by StampNScrapJunkie at 8/14/2022 03:34:00 PM