I had to play along with a challenge at Double D and Cut It Up so here I am with another coffee card! Actually one of them was for hot beverage but is there any question about what that hot beverage should be?!? LoL

This image and sentiment are from Coffee and Friends at Kraftin' Kimmie Stamps. I colored the image with Copic markers and a Dyvicl white gel pen. Pattern papers are from Echo Park Coffee & Friends. What a wild coincidence! Ha! Coffee mug, hearts and COFFEE word die cuts are from La-La Land Crafts. Since I wanted the coffee word to come up over the top of the card, I knew I needed to cut it from some sturdy paper. I thought to use some chipboard but all I have is heavy weight chipboard and I did not want to run that through my die cut machine, but then I remembered reading a post somewhere about die cutting several die cuts of an image and layering them. So I thought I would give it a try. At first, I was not sure it would work, because I used wet adhesive and they were very soft and pliable while wet. But once they dried, they were just like chipboard! Three layers! Just like that! Awesome! I will have to remember that trick! I inked edges of the coffee word die cut with Tim Holtz distress ink in Brushed Corduroy.

I spent seven hours putting my card together. What fun! It kept my mind off of so many things and I was in my happy place. Until about an hour from wrapping this up. A neighbor halfway down the street was playing his music from the car so loudly that, I kid you not, the windows on MY house were vibrating. I ignored it at first thinking that it would stop but after a half hour, I had to call the non-emergency police phone number. Then they wanted to know exactly where the music was coming from and the color of the car and a description of the neighbor. I ended up crying with the officer. He said he would send someone but since they had such a vague description, they might not be able to do anything about it. I mean all you had to do was turn down onto our street and you would hear the music and direction it was coming from! So I think I had reason to cry! I don't know if they came by but the noise finally stopped. Thank goodness! It almost ruined my happy play time. LoL

The reason it took seven hours is because I did not plan on coloring in a background; however, while coloring the peach outfit, one of my markers ran dry and so I refilled it and then immediately, had a squirt of ink comeout while coloring the flower. I had already colored most of the image by then. I did not have the heart to start all over again. So I sat and pondered it over. This is what I came up after all that pondering. I wanted to make it an indoor cafe scene, but I did not trust I could get it right and I have done the brick wall and windows before so that was an easy argument to win. LoL So I made it an outdoor sidewalk cafe! 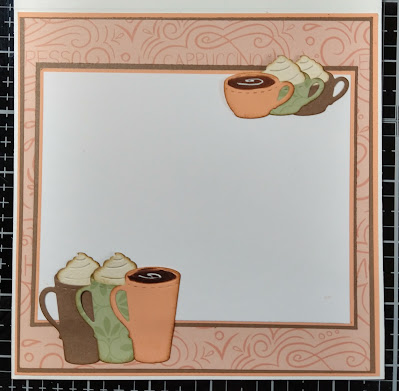 So I made this card for two very specific challenge blogs! So, I would like to participate in their challenges:

Cut it Up Challenges Challenge 265 Coffee