I am writing this because I spent all morning looking for a tutorial on YouTube and Google on how to assemble the ZFParty Ball Ornament I purchased at Amazon. I think of myself as a pretty smart gal. But until just now, I could not look at this and figure out how to work it. So I went and looked at the Q&A and I saw that someone else asked the question, are there any instructions? Yay! LoL Someone answered what worked for them was starting at the pointed end. So I thought that was a good starting point too.

I started by folding everything that had a crease. I realized rather quickly how the ornament cap would work but I could not figure out how the larger pieces worked. It finally dawned on me after several hours, I probably did not cut enough pieces and since there were eight folds on the cap, I must need eight! Yay! LoL Color me a dim lightbulb sometimes! I decided to use scraps for this since I kinda figured I might make mistakes and would end up throwing out the first one. Bingo! LoL 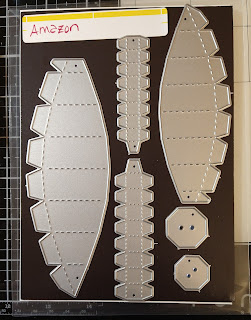 So I cut eight of the larger sizes. As you can quite easily see, there are two sizes available. I decided to work with the larger pieces. 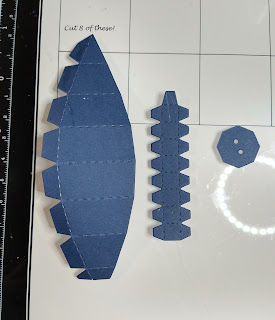 And yes, I like to follow instructions! So if the answer was start at the pointed end, I started at the pointed end. I decided to work with wet adhesive. It took awhile for each section to set and I was just working on a "prototype" so I was not as patient and careful as I would have been if I was working on the real deal! 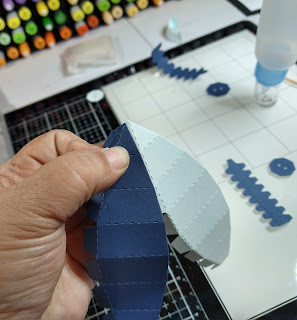 This is what it looks like once you get the first two panels glued. I had no intentions of making a tutorial. First of all, I do not know how make a video by myself. I do not have mounting equipment and there is no one living with me who could hold the camera over my shoulder so I did not even think I would be making a tutorial. But when I was done, I thought about that person who asked for the assembly instructions and was only told to start at the pointy end and my lack of understanding and I thought to myself, what if there is someone else LIKE ME out there!?! So I finished the "prototype" and then decided to just add a few things together to help others get started. Because anyone can benefit from a starting point! 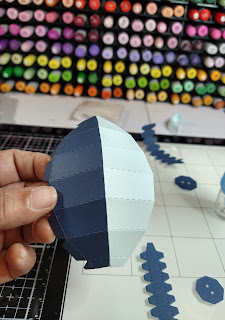 After gluing all eight sides together, you end up with something looking like this. 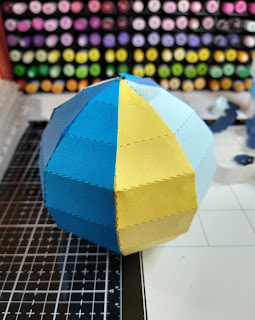 Now, to make the ornament cap, I did use wet adhesive for the "prototype", but I decided that was just too difficult because there was a lot of shifting and sliding around. So I thought to use Zot mini glue dots and it did work better. This is what I mean by mini. 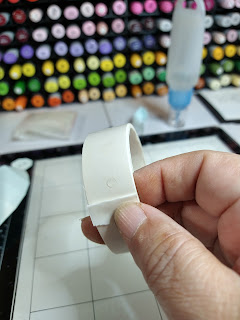 So, starting at one end, I wrapped the strap around the top. 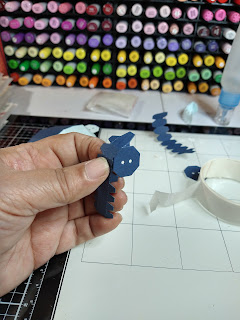 This is what it looks like once it is completely assembled. I did not finish assembling the ornament cap with the Zot mini glue dots because these are scraps and I did not want to waste mini dots but I do plan to do that on the next ornament because these did seem to work so much better than the wet adhesive. 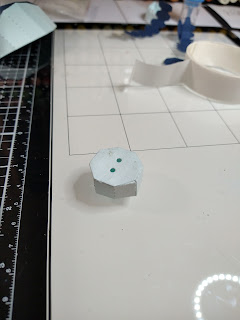 I really thought this is the end where the cap would go but as you can see, this hole is way too big for the ornament cap and the grooves on the cap do not even match up to the size of these panels on this end. 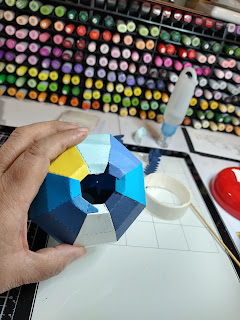 So I glued the cap to the other end of the ornament. When I get ready to make the ornaments, I plan to thread the holder in the nifty, handy holes on the cap before attaching the two together. 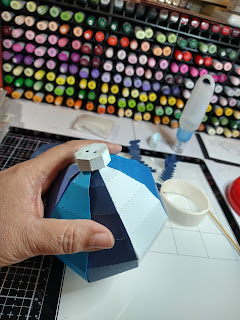 I am thinking for this end, I am going to cut a circle and then sleep on it. Not the circle, the thought of it. LoL But if one of you has already purchased this or figured it out just by looking at the die cut, please leave me a message and tell me what I did wrong or how to fix this! 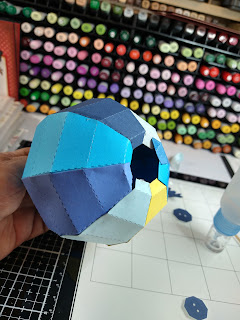 I hope this helps someone as much as it would have helped me before I got started. Sometimes, it takes a village to finish a project! It does in my house anyway. :D